E. B. White once said, "I would feel more optimistic about a bright future for man if he spent less time proving that he can outwit Nature and more time tasting her sweetness and respecting her seniority." 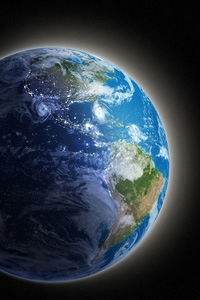 Think how many times we reference "Mother Nature" or "Mother Earth" when we talk about how Humanity is destroying the environment. Many speak of her reverently as euphemism, a separate part of G-d or perhaps the female side of G-d, romanticizing the idea of nature being female because of her nurturing qualities. I don't want to get into the religious side of all of G-d's facets, because Judaism certainly discusses this and especially because I don't want this to turn into a Torah study blog, but I do want to focus some attention on the primordial entity known as Gaea, Terra by the Romans, or as we have come to know her:

White's quote speaks to the very nature (no pun intended) of the problem we have: we use the Earth as a possession, leaving it in whatever condition we like, hoping that someone else will come along and clean up after us. Well, sorry fellow humans, Mother Earth ain't that kind of mother. We are supposed to take care of HER. Now, while it's true that this planet will probably outlast us (i.e. the human race), unless we find some way to blow ourselves up, we definitely, most assuredly need to ensure Earth's survival. For as much as people might like to think that our Earth has the ability to preserve herself, she simply can't do anything with Styrofoam or plastic. Those trinkets of human existence don't decompose (although some plastics are designed to do just that, but not enough).

In Greek mythology, Gaea was a Protogenos (primordial one), a daughter of the infinite void of Khaos, and she parthenogenically (without male assistance) gave birth to many entities, including Eros (love, not to be confused with Aphrodite's son), Pontus (the seas), Ourea (the mountains), and Uranus (the heavens). With Uranus, she had the Titans, the Hecatoncheires (hundred-handed ones), and the Cyclopes.

Gaea didn't play a major role in mythology; in fact, she stayed in the background much of the time. One of the times she did intervene was when she gave Kronos, her son and king of the Titans, a scythe of flint to kill his father, Uranus (who had been imprisoning his less aesthetically pleasing children—the one-eyed Cyclopes and the Hecatoncheires—in Tarterus. Aside from that, Mother Earth didn't get involved in the world of Humanity.

In Task Force: Gaea, the role of Mother Earth is more than just to exist. She sees a need to get involved in issues that involve her very survival and acts upon it. In fact, she gets quite involved in the creation of an entire race of people, but there's more about that in the novel. Gaea's role as a part of a larger family becomes one of the core elements of the novel, hence why the U.N. task force bears her name. Those involved with this organization see her protection as paramount. I have great respect for the Earth, and by making Gaea a stronger, more involved primordial entity, I have given her a say in what happens to her. Maybe in our world the Earth can't actually take an active stance on survival, but the world where the U.N.-sanctioned group Task Force: Gaea exists, 'ain't nobody gonna mess with Momma'.

When we see Gaea again in the sequel, her role continues to be vital, but for different reasons, reasons that I can't explain yet. And, no matter what happens with Dan, Aleta, Sarah, and Brandon, they will give their very lives if necessary to protect Gaea... Μητηρ Παντων (Matêr Pantôn)... Mother of All.

And Gaea knows this.

For more about Gaea, visit Theoi, Pantheon, and Wikipedia.
Posted by David Berger at 9:27 AM