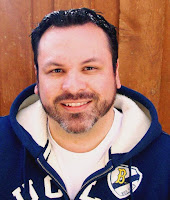 My inaugural GUEST AUTHOR interview is with Peter Saenz, author of Coven of Wolves.

When did you start writing in general?


The first thing I remember writing as a kid was when I was around 8 or 9 years old. I used my school rule lined paper tablet to write out my own Friday the 13th movie script. It was probably only 12 pages long but I had a lot of fun writing it. I’ve dabbled in writing here and there since then, but it wasn’t until I wrote my short story “New Moon Rising,” which later developed into the full novel Coven of Wolves that I began to take my writing seriously.

Why do you write, and who has influenced you in your creative ventures?


I always had a big imagination as a kid and it never really went away. That’s probably why I so easily fell into being a huge comic book reader. After I’d watch a really good movie or put down a fun book, my mind would go into overdrive imagining various made up scenarios of my own. Putting it all down on paper, or computer file as it now may be, relieves a lot of my pent-up creative ideas.

As for who influences me, there’s a lot of people who fill that slot. Author-wise, Anne Rice is one of my favorite writers. I devoured every one of her vampire series books through the years. I’m half-way through her latest book, “The Wolf Gift” and am loving every minute of it. Personally though, my husband Joseph has been my biggest cheerleader. He supports me in everything I do.

How did being gay play a role in your writing?


Well, to be honest, there’s a huge hole when it comes to the roles gay people play in central media. Generally, we’re usually typecast as the gay best friend, over the top fashionistas, psychopaths, or stereotypes used for comic relief. I have yet to see a big budget action film starring an unapologetic gay character who is taken seriously AND is responsible for saving the day. Don’t get me wrong, I LOVE seeing a shirtless Chris Evans or Ryan Reynolds running around shooting people as much as the next guy, but as a gay man there’s also a bit of a sting at the same time. So I use my writing to help fill that gap. In my stories gay people are just as valid as everyone else. No stereotypes or pigeon held personas for me. I’m hoping that more of these stories will become mainstream so that The Powers That Be can see the potential we as gay people have outside of what we’re now allowed.

Where did the idea for Coven of Wolves come from?


As a kid I LOVED horror movies. I loved the feeling of being jolted by some over the top monster jumping in front of the screen. My favorite movie monster was always the werewolf. I probably watched movies like Silver Bullet, An American Werewolf in London and The Howling series a million times over. When I fell into reading comics though, my appreciation of magic and it’s potential in storylines grew also. Illyana Rasputin aka Magik in the X-Men comics definitely sparked with me. When I see these types of characters though, they’re usually written very separately. You either get a solo werewolf movie or book, or you get a solo witch movie or book. Rarely do the two ever meet. So Coven of Wolves was meant to be a project where I get to enjoy both of my two favorite fantasy creatures in one centralized plot. My central character Devin Marshall, is he a witch or is he a werewolf? He’s both actually and you get to see just how fun and scary that is for him.

Some writers like to include a little of themselves in their work. How much of you is in the novel?


There’s a lot of me in the book actually. The way Devin reacts to any given situation is generally how I probably would. Granted, our backgrounds are very different and the last time I checked I wasn’t being chased around the country by a coven of witches and werewolves, but you can definitely get into his mindset and play out a ‘what would you do’ type scenario. I’m generally a very low key/ back of the room kind of guy. You won’t ever see me standing in front of a crowd shouting “look at me, look at me”. Because of this, I purposely wasn’t obvious about placing myself in my book. That said, there are quite a bit of friends and family in my book. Some are obvious while others are a bit more vague in recognizing. I’ll let the readers try to figure out for themselves exactly who’s who.

What does the future hold for your writing?


I’m currently working on a 12 piece short story anthology book titled “New Year’s to Christmas”. I’m hoping it’ll be available to my readers by October 2012. I was thinking about tackling a nice ghost story once the holiday book is completed, but the feedback I’ve received from the Coven of Wolves book has me wanting to sink my teeth back into those characters again. I left the first book completely open to a sequel, so there’s a lot of brainstorming going on with what new adventures the new pack will be delving into.
What advice do you have for people aspiring to be writers?

Everyone is different, but the main thing I would tell aspiring writers is that you are your own worst hindrance. I can’t tell you the amount of times I’ve told myself that what I was doing wasn’t any good or that no one would be interested in what I was writing. That self negativity did absolutely nothing but bring me down. It overly delayed what ultimately was a complete pleasure to create. Not only was my work read by others, but they LIKED it. I knew I wasn’t making Shakespeare level work but it’s still entertaining, and ultimately that’s what people are looking for. Something to take them out of their regular routines for a moment. Life changing? No, but what I wrote is still something that is appreciated. If you feel any doubt about your work, keep that in mind. In the end, you’ll always have this little piece of yourself stamped out there in the universe that no one can take away from you. And when your work is finished, do your research. Contact other writers to ask them about their experience in getting published. Some work can be released through publishing companies and others might find more success in self publication. Do what’s right for you.
Thank you, Peter. I look forward to seeing what your next literary adventures will be.
Coven of Wolves is available at Amazon.com.
Devin Marshall is alone and on the run from a coven of dark witches. New to the world of magic, Devin tries his best to outrun and outlast the coven he once swore loyalty to in order to save his soul. In a last ditch attempt at freedom he discovers help where he least expects it, but also manages to upset a pack of deadly werewolves along the way. Two supernatural cultures clash as Devin discovers hidden secrets about his past in an all or nothing attempt at survival. Coven of Wolves takes readers around the globe and back into time as a new universe of hidden societies, powerful witches, and sinister creatures dominate the landscape in their fight for control of an unsuspecting world.
Posted by David Berger at 1:32 PM