The Next Big Thing!

So, I was supposed to tag other others to participate in this blog tour, but my job dominates my time, and I didn't have time to ask other people, unfortunately. But, I wanted to post mine anyway. Thanks to John L. LeViness and Kat Heckenbach for asking me!

What is the title of your latest book?

Where did the idea come from for the book?

The novel started out as a short story called “The Olympus Corps.” back in 1985 when I was in a high school English class. Then, it was more Star-Trek-meets-Greek-myth, but as I got more and more into writing it, the Star Trek aspect disappeared, and the novel became more earthbound. But, the ideas came from my great love of comic books and Greek mythology. Through comic books like Wonder Woman, where myth and superheroics were merged, I found my calling for writing. I then realized that I wanted to use more obscure gods since not many myths, if any, were written about them. Gaea became an immediate favorite, but so did Apollo, and he was far from obscure. The idea for “finding balance” came from the core idea of Order and Chaos in the universe, and that there must always be equilibrium between them.

What genre does your book fall under?

I would call it Greek Myth Epic Fantasy. One of the more recent books I have read (and by recent, I mean the last few years) was Rick Riordan’s Percy Jackson series, and that’s probably the closest to my work, although mine is more for older readers. It’s a vocabulary thing. The novel does have some science fiction elements, but they’re so sporadic that my original category fits better.

What actors would you choose to play the part of your characters in a movie rendition? 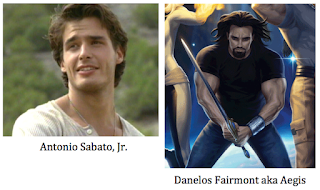 Funny you should ask that. When I had sketches of my main characters done for inspirational pieces, I modeled them after actors I knew of at the time.

An archaeology professor at Boston University with a divine heritage, especially connections to Gaea and Apollo, Danelos Fairmont possesses the sword Thyroros, the PortalBearer, that contains the Eye of Gaea, a gem that allows the bearer to use Boundless Vision to open a portal into any place he has been. Bound to an ancient prophecy, he wears an Earthsteel manacle etched with ancient Olympian symbols on his left wrist. Task Force codename: AEGIS. 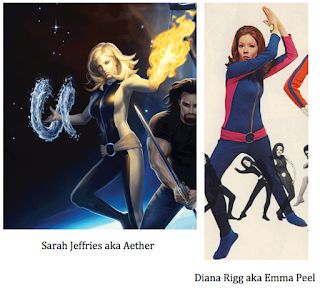 Her ancestry from an ancient race, Sarah Bishop possesses Aether, a ring that once belonged to an ancient king of a powerful land, that allows her to control the Four Elements: earth, air, fire, and water. A potter by trade, she understands the intricate relationship of these four aspects of Gaea, and has always had a strong connected to the Earth Mother. Having grown up Wiccan, she has embraced nature as a force all its own, allowing her to understand the Olympian gods' role in her life. Task Force codename: AETHER.

Dr. Aleta Halston, an expert in genetics, had her life changed radically when an experiment took a dangerous turn, binding her DNA with that of a rare white eagle. A descendant of an ancient race, Aleta received a javelin of silver Earthsteel that allows her to channel Zeus' lightning. With her white wings and in possession of the Olympian king's greatest weapon, she took the codename AETOS for Task Force: Gaea. 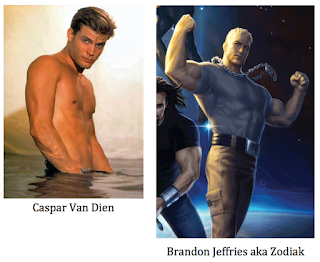 A zoologist at Northeastern University, Brandon Jeffries possesses the amulet, the Eye of Ouranos, that allows him to channel the powers of Zodiac. He's not a follower of any trend or fad, and he prefers the more casual side of life, noted especially in his clothing: T-shirt, khaki pants, and hiking boots. Using the name ZODIAK as part of Task Force: Gaea, Brandon has the ability to draw on the mystical energies from the twelve signs embossed on the amulet.

What is the one sentence synopsis of your book?

Task Force: Gaea is a compelling chronicle of how
the folly of the gods reshapes history, and only mortals—thousands of years later—can hope to fix that which an angry goddess destroyed.

Is your book self-published or represented by an agency?

How long did it take you to write the first draft of the manuscript?

Well, since it started as a short story in high school (1985) and it was finished in 2011, I’d say 26 years. It went through many incarnations in all that time, too, but the version I published has been around for about eight years (with tweaks and edits).

What other books would you compare this story to within your genre?

Who or what inspired you to write this book?

In the beginning, the comic books and Greek myth I was reading were my muses, but later on, my desire to tell stories kicked in. In order of earliest to now, I’d say other muses were Wonder Woman, some of my high school English teachers, my students, Tolkien, Piers Anthony. Lately, people who inspire me but what they do are dear friends, Cullan Hudson, Eric Arvin, and Peter Saenz.

What else about your book might pique the reader’s interest?

This story twists the ancient myths we grow up with where what the reader knows about the Olympian gods, or thinks he knows, is challenged in fresh and curious ways. The idea of finding balance in an otherwise tumultuous world is something we can all identify with, I believe. And, sometimes we have to make hard choices that mean we don’t always come out on top personally, but the greater good gets served. That’s the mark of true heroism, willingness to do whatever it takes to save others, even if it means you don’t get to see the outcome.

"During the age of Olympos, when a vengeful goddess shatters the Sacred Scales, both immortals and humans alike suffer. Apollo, the god of truth, goes from a glorious existence as The Shining One to a victim of Zeus' wrath, and his journey makes him question his godhood, his role in the cosmos, and his views on humanity. Prophecy and the Fates direct his course, and he must make difficult, yet vital, choices.

Millennia pass, and Dan, Aleta, Brandon, and Sarah-four reluctant modern-day heroes gifted by ancient civilizations born of the gods-bound by prophecy, have to choose whether or not to save their world when it could mean they never existed. They must master their new powers while battling against incomprehensible forces from the Underworld and repairing the Sacred Scales, destroyed long ago. With the equilibrium between Order and Chaos unhinged, and the Olympian gods struggling to exist, these four must ally themselves with the United Nations to protect an endangered world, becoming the only group who can fight against metaphysical threats to the Earth, forging Task Force: Gaea.

You can find Task Force: Gaea on Amazon, Barnes & Noble, Smashwords, and CreateSpace.
You can find both the book and me on Facebook. Also, check out my blog!
Posted by David Berger at 12:00 PM