So, what's happening, you ask? Well! 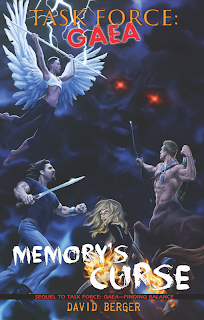 • I'm holding a Giveaway at Goodreads for ten copies of Memory's Curse. Enter now before you can't (last day is Dec. 15).

• The film treatment for Finding Balance is in the works, and I have a screenwriter looking it over for me as we speak. I want it the best it can be before giving it to 490 Entertainment.

• I'm working with Jezza Smiles on a project that involves illustrating a short story that highlights the romantic relationship between Dan Fairmont (Aegis) and his boyfriend, Ari, from Memory's Curse. The story will be a stand alone piece. More news on that as it becomes available!

• Mike Hamlett, the tremendously talented artist who did the covers for Finding Balance and Memory's Curse is working on some other artistic ideas for me. Revealed soon!

• I will be attending DitterCon, Alt*Con, MegaCon, and RainbowCon (in that order). More about each here.

• And, last, but certainly not least is a project I can't talk about yet, but I will as soon as I can. It's HUGE.
Posted by David Berger at 2:54 PM