The world of Draconica (where the Draconica) series was created, was given life by an ancient race of powerful beings known as the dragons. No one knows how they first came to exist, but some state that they have existed since the dawn of time – possibly before. Dragons were extremely powerful and very intelligent beings, sometimes appearing as winged lizards, other times appearing more humanoid. They possessed the ability to create weapons using their breath, such as fire, ice, etc. Some also possessed psychic abilities or other such similar powers.

However, all dragons had mastered the art of travelling through Time and Space, allowing them to travel to different places in the world at any time they desired. This was a skill that the dragons were highly secretive about and to this day, no one knows how they were able to do it. But the dragons have appeared all across the Universe and even visited our world at one point – which is why we have our own version of dragons.

When they created Draconica, it was said that it was originally a dead world. Wanting to give it life, they travelled across the Universe, bringing back life and forging the geography of the worlds based on the worlds they visited.

Though now extinct, the dragons are worshipped as gods by the people of Draconica and their legend lives on in the Dragonkin – humans that were granted dragon powers so that they will never be forgotten. 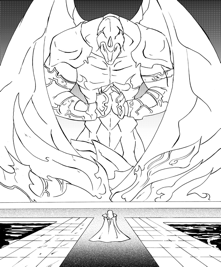 These are the dragons of Draconica and their role in Draconica legend.

Jeova - The Father of All and the first dragon. He created the Afterworld (Heaven) and the Necroworld (Hell) in the wake of The Black Hurricane. Said to be the most powerful of all the dragons, Jeova is worshipped as the one true King of Draconica and his influence spreads far and wide across the land.


Abadon - Wife of Jeova and known as The Destroyer. She was responsible for The Black Hurricane, a catastrophic event where she destroyed most life on Draconica. She was imprisoned in the Necroworld, where she has been for many thousands of years.


The Magistrate - He Who Judges The Passed. A dragon that guards the entrance to the afterlife and decides where souls go when they die.


Dronor - The son of Jeova and Abadon and creator of the Dragonkin. In his life, Dronor was a protector of mortals and sought to create peace amongst them. He also brought the Age of Sorcery to an end when he taught the mortals about science, so that they would not have to rely on magic.

Arkana - The Forest Wyvern. She created and tended to the forests of Draconica.


Frostella - The Ice Dragon. She created the ice world Naedor by blowing a terrible blizzard during a fit of rage.


Kerrigal - The one who first taught magic to the mortals. He became the rival of Dronor when he tried to teach science to the people.


Venomac - A deformed dragon known for his ugliness. It’s said he created the swamps of Draconica by breathing on Arkana’s most beautiful forest lands.


Tah - The Dragon of the Sun. Second in power only to Jeova and worshipped by the people of the eastern lands. He created the deserts when his aura burned the land and turned it to sand.


Nar-Gar - The Serpent of the Sea. A huge sea monster that turned Draconica into a set of islands by breaking the lands apart.


Baala - The Four-Horned Warlord. Founded the Baalarian Empire and taught the world of Draconica about warfare. He was previously a war ambassador in his life and no country could go to war without his say so. He died during a war with his brother Leoni.


Leoni - The Bloodthirsty Lion. Founded the Leonidan Kingdom and brother to Baala. He challenged his brother for dominance and was killed at the end of a seven year war.


Isiah - The Dragon of Love. Wife of Baala. She taught the mortals of Draconica how to love. Marriage was a concept that she taught to the mortals.


Dahli - The Muse of Art. Helped found the Republic of Garmany, the leading country in art, design and technology.
Posted by David Berger at 12:00 AM