Some conventions leave the most lasting impressions, and this year, Bent-Con 2014 certainly has etched itself into history as one of those. Held in Los Angeles at the Marriott Burbank Convention Center, this LGBTQ event brings together geeks, artists, creators, cosplayers, celebrities, and vendors from all over the world. Attending this extravaganza has only a little to do with me as an author—I truly go to see my friends. 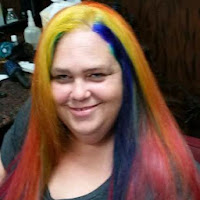 This year, I had the great pleasure of meeting my friend Cyn Duby, who describes herself as "a solitary eclectic hedge and kitchen witch with Native American and Celtic leanings," and is a fellow author; she has a piece of my heart. We shared a suite this year which undoubtedly put us in the center of the action. Arriving late Thursday evening, we spent the rest of that evening just getting acquainted in person (we met on Facebook through mutual friend, Jezza Smiles, who unfortunately couldn't make it to Bent-Con this year). The rest of the weekend resulted in frivolity and madness that cannot be described in words. Suffice it to say, we had a hilarious time. Her daughter Stevie Montoy helped me tremendously by sitting at my table when I was away, selling books, and just being a good sport in helping out throughout the weekend. 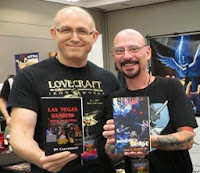 Friday brought about setting up my table, something that establishes my base of operations for the duration of the convention. To one side of me was Jim Cartwright, friend and fellow author of the Las Vegas Bandits series, and to the other was Ashley of Monkey Minion Press, maker of posters, magnets, T-shirts, art prints, and so much more. Here is where I spotted my first "con" purchase, a print of Wonder Woman that I had originally seen on Facebook (eventually gifted to me by Cyn as an early birthday present). A few tables down was The Ninjabot, another wealth of art prints, and they have the Origin series which includes a stunning piece for Wonder Woman (that I ended up buying).


Before I go into more detail, I want to thank those who make Bent-Con happen. Specifically, I have to thank Sean Maker, the president and founder. He has a big heart and warm smile, and he has become a dear friend as well as has Viktor Kerney, director of Outreach. Of course, I can't forget Jody Wheeler, VP of BC, and PK Eiselt, gentlemen I have come to know and respect over the past three years, and Bellz Jordan, someone I have known in passing, but would like to get to know better. This year, I also had the pleasure of meeting Michelle Lagos, Director of Programming and Talent Relations, and Tomás Prower, author and Youth Outreach coordinator. I hope to work with Tomás more in helping Bent-Con bring in the younger audience. Plus, I need to thank all of the volunteers and anyone else who makes Bent-Con so special.

Now for the main reason I go to Bent-Con...

To say I have friends who attend this event would be misleading—these people are family to me, some of whom I met online over a decade ago and only just recently met in person. These guys have my heart: Boston Blake, actor; Peter Saenz, author of Coven of Wolves as well as contributor to a few anthologies; and Phil Jimenez, writer/artist for Marvel and DC Comics, are brothers to me, and we share a tremendous longstanding love and respect for Wonder Woman. Missing from this 'family reunion' was another brother, Michael D'Alessio, who was unable to make it this year, but he was there in spirit. I had the privilege to meet artist Glen Hanson, someone whose work always leaves me breathless. Boston, Peter, Viktor and I had one of our Wonder Woman-themed dinners on Friday night, and the following night, Jase Peeples and Glen joined us for the second dinner devoted largely to our favorite Amazon princess.

Some people I have met in person only in the past few years (having known them through message boards and Facebook), and they, too, make up my extended family. Augie Pires, who fought through illness to come to Bent-Con on Sunday, has tremendous energy and passion for our mutual comic book love, Wonder Woman. I was thrilled that he made it. Cosplayer extraordinaire and all-around sweet guy, Chris Riley—someone who has an endearing spirit and an appreciation for the LGBTQ fans of the art that is cosplay—helped make this weekend so enjoyable for me. I also had the opportunity to meet a longtime online friend Nick Corrin for the first time, and he is one of the sweetest people I've ever met. I joked with him about "snubbing" me last year since had walked by my table numerous times, but then he left BC without saying hello. This year, he made a concerted effort to spend time chatting, and I'm so glad he did.

What truly amazes me is that every single one of these people I met online, whether it be comic book message boards or Facebook. I can't imagine not having these people in my life—we laugh together, argue about comics over dinner, talk about each other's work, and listen to industry professionals talk about the impact so many issues has on comics or cosplay or novels or life in general. A few years ago, I started this journey as both a convention attendee as well as a traveling author. If you haven't been to conventions, you really don't know what you're missing.

In case you're wondering where the cosplay pictures are, I'm choosing to highlight the friends and family I have here at Bent-Con. If you look on Facebook, NewNowNext, or The Advocate, you can find all the cosplay pictures you like. And, if you check back next year, you might just see me in my cosplay debut. Yes, I am a cosplay virgin, and I have just the costume to begin that other side of my life. But, that's for another entry... Shhhh... but let's get back to the people to which I want to devote this blog post:

Chatting with Robert Chandler has always been a highlight of my Bent-Con weekend, and finally had the opportunity late in the weekend. David Reddish, an author of Sex, Drugs & Superheroes: A Savage Journey Into a Wretched Hive of Scum and Supervillainy and The Passion of Sergius and Bacchus, was also fun to spend time with, but we both agreed we needed more time next year. Artist Terry Blas has so much talent it scares me, and I had to get a Starlord print he did if I bought anything. Although I didn't get the chance to spend much time with them this weekend, I did get a little time to chat with Zan Christensen of Northwest Press, Jon Macy, and David Mizejewski. A.J. Catalano, an exceptional artist, and I had a chance to talk about a possible project we'll do related to Task Force: Gaea. Hush hush for now!

Artist and friend Steven Garcia arrived late due to traffic, but he did show up, with all his spectacular art (I bought three pieces!). With him was the ever-adorable Chet Barbour! I didn't have the chance until late in the weekend to see E. Robert Dunn, but he lives in South Florida, so I am sure we'll grab coffee sometime when I am down that way. A fellow Long Islander, Greg Fox has been one of my favorite people for quite some time, long before I ever met him. He writes the Kyle's Bed & Breakfast comic.
I loved meeting Keith Chambers and his boyfriend Angelo Martinez—two sweet guys who had the cutest costume elements (and Keith came to my writing workshop)! Zachary Ledbetter gives awesome hugs, and we did have a chance to chat a bit throughout the weekend, but I hope to have more time to hang with him next year. Joey Dennis and I had only a quick hug hello, but I did see him randomly around the con. Next year, Joey, we sit and chat more! Lex White and David Cook (dressed like Arrow) stopped by my table—I enjoyed finally getting the chance to meet them in person. My across-the-aisle neighbors, Flex Comics, have the superbuff James Jamess and Jeremy Agapitos.


My friend Jezza Smiles was unable to make it, as were Butch McLogic, Michael Annetta, William Thomas Damon, Paul Charles, and Joe Palmer. I missed them!

New to my friends list this year were artist and aisle-mate Jacob Mott as well as fellow artist Patrick Fillion who is with Class Comics (NSFW). Across from my table was the incredibly talented Rebecca Hicks with Little Vampires, and her Wolfie is just so adorable! My friend Cyn introduced me to Jasun Mark, producer/director with Titan Media (let's just say that it's NSFW). I also can't forget Billy Konstantine—he made an excellent Iceman!

ON SATURDAY, I facilitated my first convention workshop, Character Development 101, and although I only had five guests, we had a successful session, and one of the participants, Josh, who was looking into animation, felt like he had truly learned some new things that might help him in that medium.

At 3 p.m., I attended my friend Boston's lecture, Wonder Woman: The Kink in the Golden Lasso, and this was an incredible discussion of Wonder Woman's history as well as issues like patriarchy, image adjustment, and her role in society. At 6:30 p.m., I participated on a panel, Spiritual Themes in Comics and Alternate Media, with Cyn, B. Dave Walters, and Buzz Dixon. After one of our famous Wonder Woman dinners (Peter/Viktor/Glen/Jase/Me), my fellow Amazons and I visited with Phil Jimenez for a while before attending a party in Zan's room—we actually chatted about cartoons! That's geeks for you!

SUNDAY went well, and I finished the convention having sold 17 of 20 books. Anne Rice and her son, Christopher, made an appearance, and then the exhibitor room emptied—quickly. Saying farewell to my Bent-Con family is never easy, and with big bear hugs and talk of next year, the convention came to a close.

It's not just the common interests that tie people together; it's the memories we create, the love and friendship we foster, and the networking we do to create bigger and better projects that can make a difference in the world.