One morning, I awoke with a message from my Muse:


You need to write a Celtic series. Go!

And so it began. My hibernophilia was finally going to come in handy. The next part of my inspiration came in the form of a friend/brother of mine, Scott. He and I share an appreciation for all things Avatar: The Last Airbender and The Legend of Korra as well as all things Wonder Woman. We found out, interestingly enough, that not only does Scott identify with Zuko, the Fire Prince, but he is also an Aries, a fire sign. I, on the other hand, identify with Aang, and I am a Gemini, an air sign. How intriguing, eh? 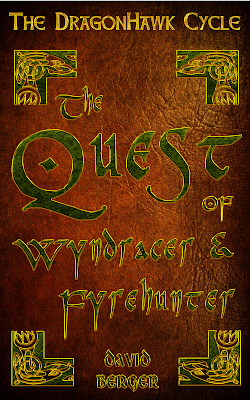 So, when this series popped into my head (and it did!), I thought that writing a series about Scott and me, and the adventures we could have, all in a Celtic milieu, would be absolutely incredible, and fun to write. Thus, The Quest of Wyndracer and Fyrehunter was born. In keeping with the Celtic mythology I would no doubt be drawing from, I named the series The DragonHawk Cycle, after the Cycles of Celtic mythology.

I'm not sure if you write, but when your Muse tells you to do something, you should probably do it, otherwise, well, there are consequences. And, by consequences, I mean your thoughts will only be on that until you do something about it.

So... I started plotting and planning. Firstborn into this novel series is Conall, a sixteen-year-old boy who lives in Silver Birch Glen and has a hawk named Lann as his companion. He's swift on his feet and eager for adventure, and he's a spiritual lad with an eye for detail. Next came Aedan, a fiery young man of sixteen whose hunting skills are unmatched in his clan. A red dragon named Fiachra bonded to him when the hatchling lost its mother, and they're inseparable. 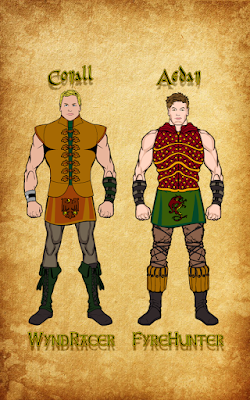 The series unfolds with both young men learn of a battle coming between the Ársa and the Fonn, two groups of ancient gods whose battle for sovereignty will involve the world of mortals, whether they want it to or not. If Conall and Aedan can find the Thirteen Wands of Danu, they can prevent this war, but finding them is not as easy as they think.

In the midst of this journey, Conall also needs to find his caomhnóir, his spiritual guide, that he needed to start looking for on his sixteenth birthday.

But, the Elders have other plans.

The expected arrival date for book one is 2017. At the moment, I expect this series to be a trilogy, but, as those with Muses know, that's not always the way things work.

Besides, I still have The Archer's Paradox (2016) and  book five, plus Of Mortal Bonds (2016 also—yikes!), to finish, since the members of Task Force: Gaea are eager for more adventures.

*Blessings, until I see you again!
Posted by David Berger at 11:46 PM