We open to Diana approaching the Louvre in Paris, presumably as an antiquities dealer, and then the scene cuts to that black and white photograph of her, Steve Trevor, and her companions in World War I. The scene cuts to Themyscira (and how gorgeous is that ocean view!) where Diana sees Steve's plane crash into the water. She then dives in to save him. The voice over is:

"I used to want to save the world. This beautiful place. But, the closer you get, the more you see the great darkness within."

I loved hearing Diana narrate this part of the trailer, especially because it helps bring the focus to her mission and backstory a bit. Then, we witness more scenes of the attack on Themyscira by the Germans, including an extraordinary move by one of the Amazons who shoots an arrow into a cliff and swings out, bow drawn, to attack. Then, a German soldier fires a bullet that Diana and Steve watch pass them as it heads for the Amazon archer.

"I learned this the hard way, a long, long time ago."

Diana has no idea what bullets are, so she doesn't know what effect it will have on her sister. Her expression of both ignorance of the moment and curiosity comes through well. The next scene shows Steve and Diana on the ground having watched what we can only assume is the death of one of her sisters by bullet. Her lack of experience probably brings about a sense of guilt for not having acted to save her sister, a sense of powerlessness, if you will.

After the DC logo, we hear Hippolyta in front of an Amazon council ask Steve, "What is your mission?" to which he replies, "To stop the war." Diana then asks, "What war?" His reply: "The war to end all wars." (a line taken from H. G. Wells, later said by Woodrow Wilson).

More scenes of Steve near the German Fokker planes, and then a view of a gas mask being destroyed by a type of mustard gas, presumably. He comments: "Weapons far deadlier than you can ever imagine." Here is where we see, for certain, one of the major antagonists of the movie: Doctor Poison. 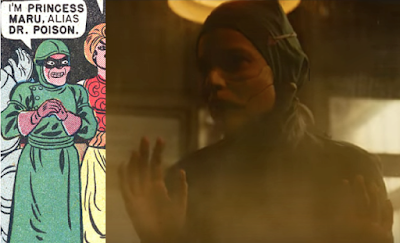 In the Golden Age, this villain was the leader of a Nazi spy ring, but since the movie is set in World War I, her role and background has yet to be determined.


This revelation confirms at least one of the antagonists in the movie. Using Doctor Poison means we get to see a side of the war that takes place off the battle field, harming more innocents than soldiers.

The next scene is Danny Huston saying, "The world can be ours." We don't know as of yet whether he will be someone otherworldly like Ares, god of war (which is certainly a possibility) or perhaps someone less known, like the Duke of Deception. It's quite possible that we haven't even seen the larger threat in the movie, something that the third trailer would reveal. Following this scene, Doctor Poison throws a what looks to be a Model 24 Stielhandgranate (stalk hand grenade) which may contain some of this gas that we see dissolving the gas mask earlier, or it could be something much more deadly.

The subsequent explosion we see may or may not have been caused by this device, but it looks to be quite devastating regardless.

A panoramic shot of Themyscira appears, with Steve telling Hippolyta, Diana, and the Amazons, "Things are more dangerous than you think." He doesn't know what the Amazons do or do not know, but he probably deduces that, since they haven't seen bullets, they won't know what other horrors exist in Man's World.

Diana then says one of the most defining lines: "I cannot stand by while innocent lives are lost." THIS is the Diana who wants to leave the comfort and protection of her mother, sisters, and island home to enter an unknown world to protect people she has never seen. That is a level of compassion and courage that will define her when she takes up the mantle of Wonder Woman.

We then see Diana collect her armor: her shield, sword, and finally, her costume. Hippolyta says what we heard her say in the first trailer, "Be careful, Diana." Queen of the Amazons she may be, but this doesn't sound like a royal edict or command—this is mother expressing genuine concern for her only daughter.

The scenes that follow made me the most giddy I have ever been between both trailers. Steve tells his peers that Diana is his secretary (ironically, this is the term Diana takes umbrage with in trailer #1 when Etta Candy tells her she is Steve Trevor's secretary, a term defined by what the Amazons would call slavery). What follows is a parallel scene from Superman I when Christopher Reeve, as Clark Kent, saves Lois from a bullet. Here, Diana saves Steve from a bullet by deflecting it, but the hot bullet lands in Steve's hand, creating a comedic moment.

You can see the moving versions of these pictures here.

Steve then comments, "She's a very good secretary." And the scene in the WHOLE trailer that made me grin like a goofy child was when Diana then performs her "bullets and bracelets" in fast fashion in the alley. That was the defining moment when I knew Gal Gadot could be Wonder Woman for me. I had tears in my eyes.

Diana's next line helps to affirm her place in the world of superheroes and compassionate people:

"It is our sacred duty to defend the world..."

She is then seen in her armor in the fox hole saying,

A woman taking a stand for her own responsibility and power—THIS! As she climbs up into No Man's Land above the fox hole, Steve screams her name. This time, she walks across the landscape tall and confident. We now see another bullet heading straight for her, and when it's in front of her, she lifts her arm to deflect it with an expression of, "I know what to do," unlike when she saw her sister shot on Themyscira.

A montage of images, some from the original trailer (perhaps with a different view on some of them), follows. Diana at one point flips over a fence and literally hits the ground running—an action scene that puts me right back into a comic book. A quick flash at Dr. Poison, and then Diana is whipping someone around with her lasso (presumably Danny Huston? or Dr. Poison?), followed by a building exploding (not connected with the lasso whip).

Another amazing piece of choreography—and this movie already seems to have some tremendous, dance-like battle maneuvers—happens when Diana goes up against Danny Huston's character, and she breaks his sword on her bracer. You just have to see it. More quick scenes, some of different views from scenes in the Comic Con trailer, and then Diana leaps into the sky, crosses her wrists, and lightning strikes her bracelets. Was that Ares? Does she fly? Did she leap? Regardless, it gave me goosebumps.

After a flash of the Wonder Woman logo, we see a clip of Diana talking with Etta Candy, commenting on how can women fight in the layered clothing of early 20th century garb in London. Etta's reply is, "We use our principles. Although, I am not opposed to engaging in a bit of fisticuffs should the occasion arise." Clever and funny! 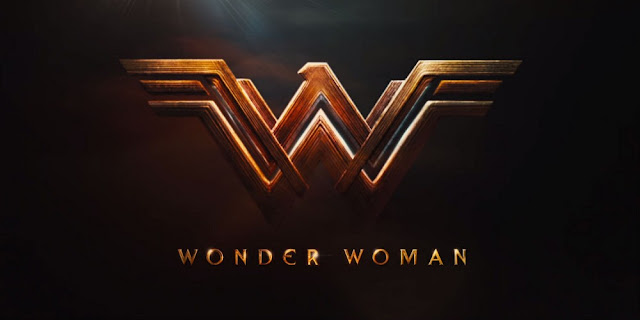 This trailer definitely gave me more to be hopeful about since I hadn't seen any bullets-and-bracelets action in the first trailer. Something I don't think we will see is the traditional tournament on Themyscira. Diana will decide to go back with Steve, and she'll probably do it defying her mother's wishes. I'm glad we finally have confirmation about Dr. Poison. My greatest hope is that the third trailer will show more of the bigger villain as well as more examples of Diana's compassion. We've seen her strength and skill, but Wonder Woman's love and compassion are as much a trademark of her character as the warrior aspects, perhaps even more.

After forty years of being a fan of the character, I am finally going to see my one, true icon on the big screen, and it makes me teary-eyed just to think about it. Diana will finally get her comeuppance.

And, it's going to be EPIC.

Posted by David Berger at 5:45 PM No comments: