At 8 years old, I learned about a superhero who ultimately would change my life—entirely. Anyone who knows me knows this to be true. Just how she and I became acquainted is for another post, but, suffice it to say, for the past 42 years, I have read Wonder Woman comics, seen her in animation (SuperFriends, Justice League/Unlimited, Justice League movies, Brady Bunch), and live action (Cathy Lee Crosby, Ellie Wood Walker, Lynda Carter, and now, Gal Gadot). I have even cosplayed as my own "Captain Wonder" character at conventions.

She obviously holds importance to me more than some humans do.

Friday, June 2, the first live action Wonder Woman movie debuted in the United States. This groundbreaking event in her 76 year history would forever change the Amazing Amazon's world in ways beyond imagining. But, before I talk about the movie (which I have now seen twice), I want to talk about someone I call... 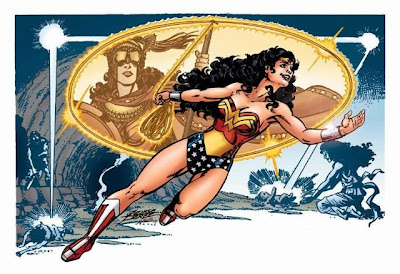 Every Wonder Woman fan has his or her own "Diana." She embodies certain elements that speak to the individual's sensibilities, preferences, personal "spin" (pardon the pun), and all around idea of just who she should be. My Diana is physically like George Perez's version from the 1986 reboot. I like her armor, her hair, her facial structure, etc. When I saw her jump from the pages of Wonder Woman #1 in 1986, I cried real tears of joy. How we got a #1 for Wonder Woman in 1986 when she made her original debut in 1941 is another story, but she was back, and in full George Perez-ian force. This Diana, as like her predecessor, was sculpted from clay by her mother, Queen Hippolyte of the Amazons, and she was given life by the goddesses (as well as Hermes) of Mount Olympus.

In addition to her physical skills, her other gifts were her capacity to love, her compassion, her wisdom, and her strength of spirit. Her loving heart, to me, was perhaps her greatest tool against war, hatred, and deception. This Diana rarely, if ever, used a bladed weapon, relying largely on her bracelets and lasso of Hestia. While skilled in a myriad of combat styles, she would rather open her hand to someone in peace before striking him or her in battle. 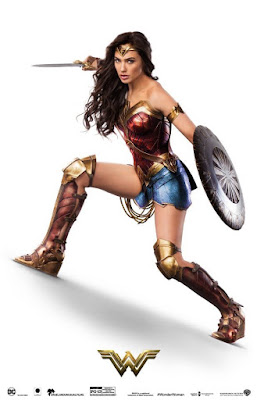 When Batman v. Superman came out in 2016, the biggest anticipation was the appearance of Wonder Woman—her first on the big screen in 75 years. The Amazon princess did not disappoint. In fact, many claim (like me) that she was the best part of the movie.

This Wonder Woman wears Greek-inspired armor that has elements of her iconic costume, but she also wields a sword and shield. More on that later.

This brings me to the highly-anticipated solo Wonder Woman film. With the moment of its announcement, the anticipation ran in all directions, with some worried that Patty Jenkins couldn't succeed in bringing Diana to the big screen while others felt electric with the possibilities of seeing her in all her red, gold, and blue glory.

As information became available, the buzz about the upcoming film ranged from the gentle one of a beehive to the that of an angry hornet's nest.

Some questions that arose were:
Many, many, MANY more questions sprouted up around this film. Speculation grew, and teaser images as well as trailers hinted at many possibilities, frustrating those who yearned for answers.

There is much more I can and will say on this movie in another post, but I want to give you what you came here to read—my review.

THINGS I WISH WERE DIFFERENT

OVERALL... I'm happy. It gave me the essence of the character I love, even if it's not MY Diana (see above), so I have to live with the changes made. Perhaps the sequel will change some things. I understand why people might not enjoy this film. I do get it, and I will not try to persuade anyone to like it. This generation has its own Wonder Woman, and I will enjoy watching a new audience embrace a version of the character I fell in love with 42 years ago.
Posted by David Berger at 1:26 AM