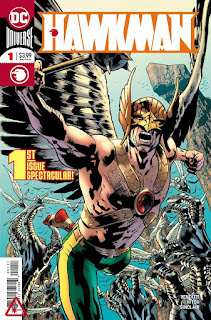 Cover: From the outset, Hawkman, classic mace in hand, prepares to fight an onslaught of hawkmen of a sort. I’m a big fan of the hairy-chested hero, so this cover did not disappoint.

A brief intro to Carter Hall, including references to his former incarnations. He’s in pursuit of the past, of understanding something about himself. He wants to retrieve the Nautilus of Revealment, an artifact that will help him in this search of self-discovery. A golem guarding it in an underwater sanctuary, Ooahk Kung, comes to life and tries to stop him.

Flash to before this. A friend on a boat in the Aegean guides Carter to a place called the “Ape’s Paw,” a group of islands near Santorini. That the story begins in the womb of mythology means extranormal events will probably take place throughout the books. Carter lives on grants and consulting fees and not the artifacts he discovers, much to the chagrin of his friend, Yiannis. Carter dons his Hawkman attire and flies off.

Return to now. Ooahk Kung pursues Hawkman to retrieve the Nautilus of Revealment, and Hawkman loses him for a moment until surfacing above the water where the golem continues his relentless pursuit. Hawkman thinks, because he has wings, he can escape, but the golem sprouts wings of his own, and Hawkman speaks of the Wingors, mythic, winged primates who visited the Earth from another realm. Finally, finished with being the prey, Hawkman swings his mace, pulverizing the golem.

“I get no joy from destroying history,” he comments. Whatever this Nautilus can do must be worth destroying for.

The next scene is London where he meets up with Madame Xanadu. They have some playful banter before they get down to business: understanding the Nautilus. She realizes he must be digging into someone, not something. He affirms that he is that one. He comments how, with his vast experience and knowledge, he cannot rest. He feels something is gnawing at him.

She cuts his hand, his blood dripping onto the Nautilus. With a few words in a foreign tongue, Carter falls to the floor. He sees all his prior incarnations: Prince Khufu, Maat Kha-tar of Egypt—lives he knew to be his, and Katar Hol of Thanagar, Catar-ol of Krypton, among others—lives he thought were someone else’s.

The splash page is filled with a myriad of iterations of Hawkmen. He realizes that he hasn’t just been reincarnated across time; he’s been reincarnating across space as well.

He sees an origin that will bring devastation to all, starting with Earth. He then snaps out of his reverie.


Xanadu asks about some of the versions of Hawkman, including a Katarthul of Rann.


He realizes he will have to endure more death and reincarnation before he understands what he wants to know.

I enjoyed how the issue wasn’t overly complicated with details or backstory just yet. Carter’s journey is beginning, and he needs to find answers from somewhere. The connection to magic through Madame Xanadu was a great touch, especially because it links the mystical with what appears to be the science-based. We know nothing about this Hawkman yet, and the story that unfolds should be a fun ride. Hitch’s pencils coupled with his and Currie’s inks were vibrant and detailed, providing the right amount of artistry to begin this tale. Overall, I am intrigued. Not just because I am a fan of the character, but also because I see a character I can relate to that is not overly and unnecessarily complex.
Posted by David Berger at 10:59 PM